In the hypothetical Venn diagram between attendees of curated “pop-up” environments and fans of the Fifty Shades franchise, there’s a lot of crossover, especially in a city like Los Angeles. Both of these “experiences,” we’ll call them, are polarizing. You love it or you hate it. Or maybe you love to hate it. Themed pop-ups are nothing more than a curated Instagram set, and Fifty Shades is not an educational or aspirational depiction of any real relationship. And that’s said with no shade to either. Sometimes it’s nice to just have a good time and to remember sex is not that deep.

To promote Fifty Shades Freed, the final chapter in the cultural empire, NBCUniversal created a Museum of Ice Cream-esque experience for fans on the legendary Sunset Strip. “Fifty: 50 Shades Brought to Life” invited fans to walk through six curated rooms, bask in the energy of the films and, of course, make their own #content out of it.

With plenty of wanna-be Mr. Greys lined up outside in slim-fitting suits, the second I exited my Lyft I was transported into the textbook-sexy world of Christian and Ana. The first room—which imitated an office waiting room, complete with a “Mr. Grey will see you now” neon sign— kicked off the 30-minute experience with a premium Instagram opportunity. You had to make a choice though: either you could be in focus, or the neon sign could. Never both. The leather bench placed in front of the neon looked simple enough, but upon attempting to take a well-posed Instagram pic, I realized that it was actually wobbly and a bit awkward to sit in. This couldn’t have been a misstep of the expert curators; the nuanced experiences within the experience had to be intentional, right?

It was only when I spoke to KB, a guest in her late twenties, that I realized the chair was all part of the subtleties hiding amongst the rooms. “It makes you sit in a certain way. It’s kind of like, ‘I have no choice but to sit in a sexy way,’ I like that,” she explains as she makes her way through the rooms with friends.

Other rooms included a Yayoi Kusama’s Infinity Room-inspired mirrored room with dark lighting and an almost disassociating element that made it hard to take a selfie (though it was perfect for videos). The black, red and grey color scheme was broken for a minute in a wedding-inspired room filled with pink roses and loose fabric petals for tossing and turning, for a perfectly timed Boomerang.

The experience ended in The Red Room, modeled after the sex den in Christian’s house, complete with a much more comfortable chair to sit, stand or prop yourself on and many of the sex props, from whips to chains. Unlike the oft-dubbed problematic BDSM-fueled power dynamic between Christian and Ana in the franchise, the mostly female attendees had full agency over the way they posed and navigated the environment, as contrived and silly as it may have been.

For an environment crafted to evoke feelings of sexuality and romance, the energy amongst the pop-up was one of female comradery and confidence.

Hieu and Sanjay, 25 and 24 respectively, giggled in unison as they agreed that The Red Room was their favorite. “I liked how the chairs were set up…the solo chair so you could be the focus of the shot,” Hieu says.

Guests knew what to expect and didn’t judge as women practically laid on the floor to get the most flattering angle of their friends. For an environment crafted to evoke feelings of sexuality and romance, the energy amongst the pop-up was one of female comradery and confidence. Childish Gambino and Dupa Lipa played as lines like “Do you know which poses you want?” and “How do I hold this whip so it looks nice?” echoed from the rooms. Posing for pictures and having a good time isn’t embarrassing or shallow; a pop-up masquerading as a museum might have been. This is what “Fifty” got right.

In Fifty Shades, Ana is virginal, impressionable and swept up by a powerful man who showers her in presents and life upgrades that anyone—from a sexually frustrated mom to a college student—can’t deny their envy of. She is not the type of girl who’d likely attend a pop-up experience, let alone bask in her confidence and take selfies. At “Fifty,” the silliness and outrageousness of the franchise was present in the form of literal whips and metaphorical slogans, but the romanticized control—that is, Christian’s ownership of Ana—was not. While a lot of us ended up with similar photos, at least we didn’t have anyone telling us how or how not to hold the whip. 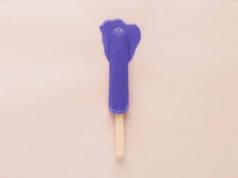