Facials aren’t only popular at the spa, but in the bedroom as well. A new survey fromBad Girls Bible found ejaculating on the face is one of the most popular options for men about to climax. In fact, 16 percent of men’s ejaculations outside of a vagina were done on a woman’s face. The research notes the act has never been more popular, as young adults 18 to 24 are the group most likely to finish on a face (and least likely to finish inside a vagina).

“I think it’s both a show of dominance as well as a sign that the woman is so sexually aroused by her partner that she just can’t get enough of him,” adult performer, director and producer Kayden Kross tells Playbloy. “Not only does she need him on her and inher, she needs his fluids dripping off of her face. You have to really be into someone to allow them to smear body fluids anywhere, much less on the face.”

Among uneducated circles, some believe a man’s semen is good for their skin, so they treat a facial as, well, a facial. According to Dr. Will Kirby, who has spoken with both Daily Beast and Cosmopolitan on the subject in the past, semen delivers absolutely no benefit to the skin. While it’s true that semen contains protein, and protein is good for your skin, it doesn’t contain enough to offer any benefit. “Anyone who says otherwise is either misinformed or purposefully misleading you,” he says.

If any semen gets in the eye, it burns like hell. “With its heavy salt content, semen can redden and sting the eyes if it gets into them, so the female should always close her eyes before ejaculation,” Katy Zvolerin, sexologist and director of public relations at Adam & Eve advises. “If some happens to get into the eye, however, a woman should rinse her eye with warm tap water or saline solution. If the male is free from all STDs (which can be transmitted this way!), there should not be any issue.”

Nikki Goldstein, sexologist and relationship expert, tells Playboy it’s not just men who love giving them—some women love the power dynamic a facial involves. “Giving someone a facial can be a very empowering act that makes the man feel not only masculine but dominant and can place the receiver in a submissive role,” she says. “For those who enjoy a bit of power play, the facial can be a great act.“

She continues, “Some people think that giving a woman a facial is degrading to them and a sign of ownership (for example, marking your territory). I think it really depends on…why you want to do it and why you might find it a turn on,” Zvolerin agrees. “While it can be about power and control, in most instances, if both parties are willing, it can be a fun and playful part of the sexual experience,” she says. “In a healthy, equal sexual relationship (or encounter), facials can be a fun, messy part of sex.”

Obviously, the act of facials is complicated and nuanced. So, before you unload, be a gentleman, ask for her consent, have a clean towel at the ready and aim for the mouth or chin. Good luck and happy humping. 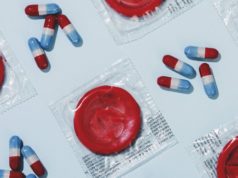